The Pioneer of Male Nursing in Bermuda – The Royal Gazette 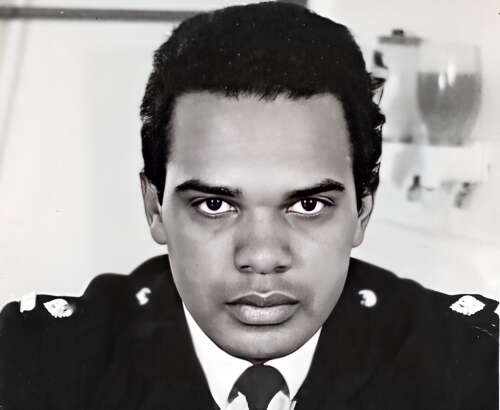 In the second in a series of profiles to mark Nurses Month, Cecille Snaith-Simmons tells the story of Edward Dyer, Bermuda’s first nurse.

Edward Dyer was one of seven children born to Kathlyn Dyer and Leslie Dyer, a highly respected electrical contractor from Spanish Point, Pembroke.

It was no surprise that Edward wanted to follow in his father’s footsteps. It was for this reason that he and his brother, Charles, left Bermuda in 1957 to continue their education in Bristol, England, where their aunt, Lorraine Dyer-Bizek resided. Their aunt was a highly respected nurse who helped encourage many Bermudians to study nursing in England. She convinced Edward to change careers to a career Bermuda men had never considered – nursing.

In 1958 he began training at Digby Psychiatric Hospital in Exeter, Devon. After receiving his designation as a registered psychiatric nurse, he inquired about job opportunities at home. Simon Fraser, the chief medical officer, recommended that he complete his general training before returning to Bermuda. This, he thought, would give him more employment options. Edward enrolled at Frenchay General Hospital and, after graduating as a state registered nurse, stayed on for a further two years to complete his postgraduate studies. From there Eddie, as he is often called, moved to Glenside Psychiatric Hospital in Bristol, where he was employed until 1965, when he returned to Bermuda to work at St Brendan’s Hospital, renamed since the Mid -Atlantic Wellness Institute.

Edward Dyer returned to Bermuda at a time when Parliament was debating the establishment of medical clinics within the prison system. He obtained a position at St Brendan’s Hospital, but only stayed there briefly before the establishment of the clinics was approved. He was transferred to the newly created post within HM Prisons, where he was employed as a Divisional Officer. Barry Whaley, the new chief medical officer, was now in charge of prisons. He recognized Eddie’s potential and gave him full responsibility for setting up medical clinics at all three men’s prisons – Casemates (now renamed Westgate Correctional Facility), the Prison Farm and the Senior Training School, which was then located in the town of St George. . Today, this facility is located in the coeducational facility next to the Farm Jail. His ability to create and develop medical clinics within the prison system earned him promotion in 1971 to senior officer.

Dr Whaley arranged to send Milton Pringle and Edward Dyer to visit various prison establishments and services in Britain. Later Mr Dyer returned to England to interview three nurses to cover up the work he had started. Of the three, Aldwyn Savory was chosen to be in charge of the prison nurses. These nurses assumed the position of Specialist Officer and Mr. Dyer was promoted to Chief Officer, moving from the medical side of the prison system to the disciplinary side.

In 1973, Mr. Dyer was appointed Chief Officer and oversaw the Prison Casemates.

There was a review and reorganization of the Prison Service in 1977, which resulted in the post of Warden and Deputy being abolished and replaced by that of Commissioner. All officers were encouraged to apply for specialist training. Milton Pringle and Edward Dyer passed and received the title of Supernumerary Chief Officer. They were sent for training by the Home Office in London. They trained in Bermuda for three months and in England for three months. The Home Office then sent them for three years to the Prison Staff College in Yorkshire and to various specialist training centers in Britain. They completed the course in two years, and on their return to Bermuda in 1978 Milton Pringle was promoted to Assistant Commissioner and Edward Dyer Commissioner of Prisons. Edward’s nursing qualifications, specialized training and management skills had placed him in an ideal position.

Prior to this, he had been part of the initial planning team for the new Westgate Correctional Center and had responsibility for bringing the new prison online.

In the early 2000s, he traveled to Tanzania three times as a member of the Adventures in Health, Education and Educational Development team organized outside the United States but led in Bermuda by local orthodontist Deborah Tuzo.

Joan Simmons invited him to join a group of AME Church members traveling to Mozambique to fix the power supply for a new school the group was funding. This presented a challenge, as the high water table in the area did not allow for underground conduits or cables. Eddie described it as a most interesting and rewarding experience.

Now in his 80s, Eddie stays busy. He loves boats, has built two rigs, sailed his own J24 sailboat and taught sailing at the Royal Hamilton Amateur Dinghy Club. Much to the delight of his wife, Nadine, he used the carpentry skills learned from his father and two uncles to redesign their kitchen. For this superior work, he received the Do-It-Yourself Award from Gorham’s.

For 24 years he volunteered at the blood bank at King Edward VII Memorial Hospital and for the past ten years worked part-time as facilities manager at Charities House.

Eddie is the proud father of five children.

It is with great pleasure that I share with you, during this month dedicated to honoring nurses, the brilliant career of Bermuda’s first nurse, Edward Dyer.