The fight for the independents – The Royal Gazette 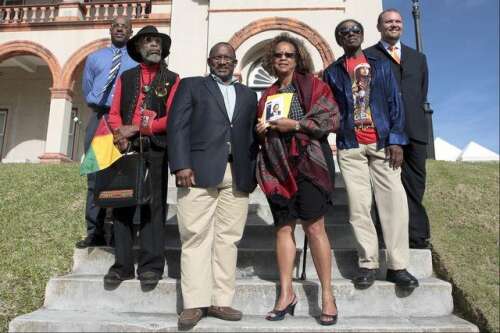 Intimidating perspective: independent candidates in the 2012 general elections on the steps of Parliament. From left to right, Cornell Fubler, Gershwyn Smith, Roderick Simons, Cindy Swan, who has spoken on behalf of her husband, Kim Swan, David W Burch and David Petty. None succeeded in the general election that followed

The Bermuda independents issue continues to surface from time to time. Mainly online, and often in reaction to the politics of the day, making it difficult to determine if there is a serious and growing groundswell for such a change or if it is just the fanciful expression of ‘a shared romantic notion.

I am inclined to believe that it is more the last than the first.

There is little evidence that concrete action is being taken. Without surprise. It will take hard work. Voters will need to be convinced that a set of Independents will serve us and Bermuda better and more effectively than what we have now, which is essentially a choice between two political parties and which one they put forward for election.

The irony is that the move to independents will also require organization and coordination – two of the very attributes that are a distinguishing but key characteristic of political parties and that help determine their success, or not, at the polls.

Does that sound intimidating? That is – in the absence of more widespread political will to make it happen.

First, there is the weight of history. The advent of political parties in Bermuda in the 1960s and their organization led to long overdue advances on many critical fronts. The change followed when Bermuda moved from representative government to responsible government under the 1968 (and current) Constitutional Order. Progress was made possible in large part by a simple organizational push, first through the training of the PLP and, lastly, by the UBP in response.

This brings us to the second point. Organization is also necessary to run a government. Political parties, for all their imperfections, have on the whole proved to be effective decision-makers. It is a force that should not be overlooked or taken lightly.

Take the current pandemic, for example. There were some tough decisions that had to be made, and made quickly, and they were. This proved to be a defining period for the administration of the PLP. Yes, there was dissent in the face of these decisions, as well as staunchly disgruntled voters who saw their divergent views as uninfluenced or voiceless, and therefore unrepresented. But the circumstances of Covid-19 demanded the opposite: a unified approach.

The strength of responsible government was thus underlined. The downside was also pointed out. But how a loose collection or network of independents might have reacted under similar circumstances will remain a matter of conjecture.

Of course, a serious and early assembly is needed to make this even possible – and long before an election takes place. Here I’m going to borrow a line from the comedic George Carlin, a caustic wit but delicious in his day. “If you can’t beat them,” he said, “arrange to make them beat. “

Not easy that. Both parties are fairly well anchored in our political and parliamentary structure. It is difficult to imagine a position being abandoned or ceded.

This does not mean that there cannot be change, even from within. It will be up to individual members to begin to chart a new course.

I think of the words of the 18th century political philosopher Edmund Burke, who was also a member of the House of Commons for 30 years. He was a conservative, yes, but also an abolitionist, ahead of his time, who was not afraid to reverse the whip of his party. He even went so far as to introduce a bill prohibiting slave owners from sitting in the Commons.

Here is what he had to say to his constituents about his role as MP: “Your representative owes you not only his industry, but his judgment, and he betrays, instead of serving you, if he sacrifices it to your opinion. . “

Imagine that, if you can. Surely, and ultimately, like so many things in life, it’s all about balance.

A little postscript this week on the Senate where there are three so-called independents. They are called that because they are not required to follow a party line. The question has been raised as to whether there is a line of Government House, each of them before their nomination to the governor of the day. I am not aware. But I am aware of several occasions when they did not vote as a bloc.

There were also those rare occasions when they joined with the three opposition members in defeating a government bill, a cannabis law and before that the municipalities. Another comes to mind as well: It was in the 1990s, when a similar alliance thwarted the government’s legislative plan for telecommunications reform. The underlying idea then was that the Bermuda market was too small to compete and cell phones would not be successful. I am not joking.

Checks and balances are all well and good, but cases like these raise the question of whether it is fair that an unelected body can thwart a democratically elected government, even if not for more. one year.