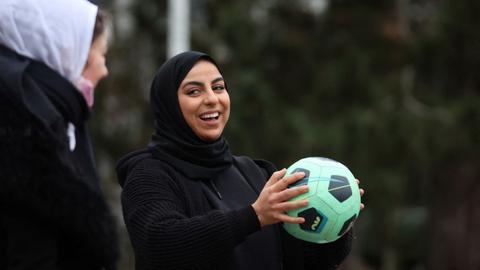 The bill includes a clause stating that the wearing of “conspicuous religious symbols is prohibited” in events and competitions organized by sports federations.

A bill that would ban the wearing of the hijab in sports competitions has been sent to the French National Assembly after the Senate refused to vote on the legislation.

The broader bill is devoted to the “democratization of sport”, including how major sports federations are governed.

But it includes a clause, previously annexed as an amendment by the conservative majority upper house, stipulating that the wearing of “ostentatious religious symbols is prohibited” in events and competitions organized by sports federations.

This decision is however opposed by the centrist government of President Emmanuel Macron and his allies who have a majority in the National Assembly, which has the final vote.

The place of religion and religious symbols worn in public is a long-standing subject of controversy in France, which is home to Europe’s largest Muslim minority.

READ MORE:
The hijab: A French obsession that should have expired during the pandemic

The identity and place of Islam in France are burning questions ahead of the presidential election in April, with two far-right candidates whose platforms question the compatibility of Islam with the values ​​of the Republic, winning nearly 35% of the votes of the electors.

Elsewhere, divisions over the hijab –– the hair and neck covering worn by Muslim women –– have fueled protests in the Indian state of Karnataka after the right-wing government banned the garment in classrooms .

READ MORE: Women in France seek to end ‘humiliation’ against hijab in sport

France will host the Summer Olympics in 2024 and critics of the legislation have questioned how it will affect the protocol at the Games, whose participants will include conservative Muslim countries if passed.

The charter of the Olympics states that “no kind of demonstration or political, religious or racial propaganda is permitted at any Olympic venue, venue or other area”.

READ MORE: France again targets the hijab while denying the existence of “Islamophobia”