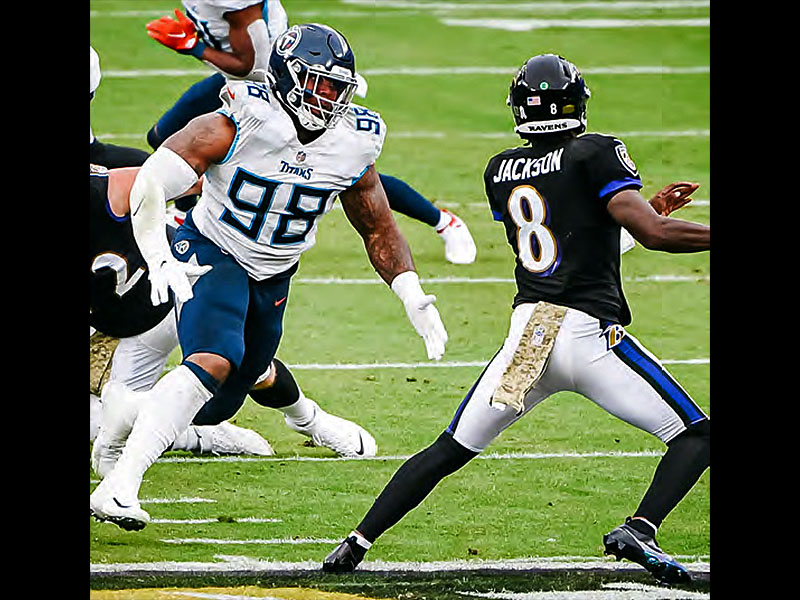 Nashville, TN – The Tennessee Titans and Baltimore Ravens have developed a heated rivalry in 26 all-time meetings since the series’ inception in 1996, highlighted by five hard-fought playoff contests – most recently a 20-13 victory Ravens wild-card on January 10, 2021.

No team has faced the Titans/Oilers more in playoff history than the Ravens, despite the first such matchup not occurring until January 2001. Including all regular season games and playoffs, the series is tied 13-13.

The two teams played together in the AFC Central Division for six seasons after the Ravens moved to Baltimore from Cleveland in 1996. The league realignment in 2002 brought the Titans to the AFC South and the Ravens to the AFC North, ending their semi-annual season. meetings. In the 13 games since the realignment, the Titans lead 7-6.

The Ravens last visited Tennessee in the regular season on October 14, 2018 and handed the Titans a 21-0 loss. It was the first and only time the Titans were shutout at Nissan Stadium.

The next time they faced off was on January 11, 2020, when the Titans traveled to M&T Bank Stadium for a divisional playoff game and came away with a 28-12 win over the No. 1 Ravens. series No. 1. Derrick Henry rushed for 195 yards in the contest.

In a rematch on November 22, 2020, the Titans once again traveled to Baltimore and went into overtime. Tied at 24-24, Henry ran for a game-ending 29-yard touchdown to deliver a 30-24 victory.

Then, after the 2020 regular season, the Ravens visited Nissan Stadium and rushed Lamar Jackson’s 136 rushing yards for a 20-13 win in the first round of the playoffs. It was the fifth time in five Titans-Ravens playoff games that the road team had won.

The Titans controlled the majority of results in the first five years of the series, winning six of their first nine games. Then, in 2000, the Ravens stole the show. Despite holding the NFL’s best record at 13-3, the Titans lost to the Ravens at home in the regular season – the Titans’ first-ever loss at Nissan Stadium – and then again in a divisional playoff game. the same year. The playoff victory launched the Ravens to their eventual Super Bowl XXXV championship.

The Ravens won a total of five consecutive games against the Titans until the 2003 playoffs, when the Titans won at Baltimore in a wildcard playoff game on a 46-yard field goal by Gary Anderson in the final minute of play.

Five years later at Nissan Stadium, the two clubs met again in the playoffs, this time in the 2008 Divisional Round. Matt Stover’s 43-yard field goal with less than a minute on the clock gave the Ravens a 13-10 win over the top-seeded Titans.

The Ravens convert 12 of their 17 third attempts, including eight of nine attempts in the first half. Joe Flacco passes for 238 yards and a touchdown, while Alex Collins rushes for 54 yards and two scores for Baltimore.

The Titans never lag after scoring the game’s first 14 points, beating the AFC’s No. 1 seed Ravens. Derrick Henry rushes for 195 yards on 30 carries, including a 66-yard rush to set up a play in which he completes a three-yard touchdown pass to receiver Corey Davis.

The Baltimore Ravens tie the game at 24-24 with 15 seconds left in the fourth quarter on a 29-yard field goal. The Ravens win the toss in overtime, but the Titans defense forces a three-and-out to set the stage for the game-winning 73-yard run.

Ryan Tannehill passes for 165 yards and a touchdown to AJ Brown (six receptions, 83 yards), but Tannehill is intercepted by cornerback Marcus Peters with less than two minutes left to help seal the victory for Baltimore.