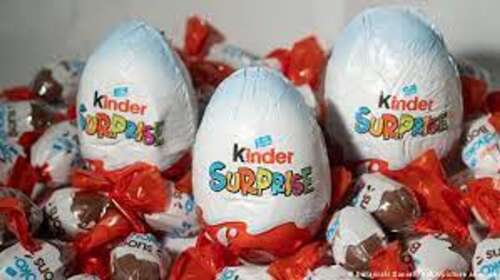 Health scare: Kinder products have been pulled from shelves on the islands for health reasons (photo provided)

A popular chocolate bar has been pulled from store shelves over fears of possible salmonella contamination.

Kinder products, which include chocolate eggs and bars, have been removed from Lindo grocery stores.

In a statement, the supermarket said it had received a “massive recall notice for all Kinder products”.

A company spokeswoman said: “”We urge all of our customers who have purchased any of these items from Lindo stores to return them as soon as possible for a full refund and do not consume them.

“If the products have already been consumed and you are concerned, please consult your GP.”

The statement said manufacturer Ferrero issued a massive recall notice for all Kinder products that were manufactured at any of its sites in Belgium between June 2021 and today.

The statement did not specify why the product was removed.

But according to reports from the British Broadcasting Corporation, the recall was made due to a salmonella scare.

Products were pulled from UK and US shelves last week.

The BBC report said: “Ferrero has recalled some of its Kinder chocolates from stores in the United States due to potential salmonella contamination.

“It comes after the company recalled its Kinder Surprise chocolate eggs from UK stores earlier this week.”

The report adds that manufacturer Ferrero made the decision after salmonella was detected at a factory in Belgium.

It came after more than 60 people in the UK, mostly young children, were infected with salmonella in an outbreak linked to Kinder Surprise sweets.