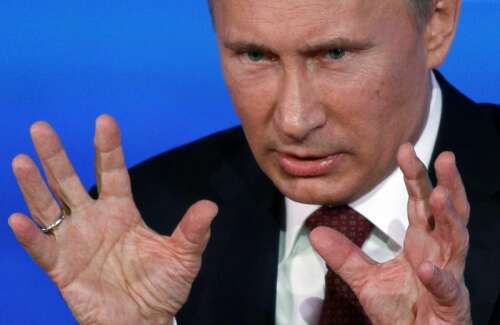 Vladimir Putin is Adolf Hitler reincarnated. Hitler attempted to create a German empire throughout Europe during World War II. Putin wants to recreate a Russian empire in Europe from the invasion of Ukraine. Unfortunately, the democracies show tendencies of military distrust similar to those the Allies showed against Hitler’s initial invasions.

Putin thought he would invade Ukraine, but he met fierce resistance from the Ukrainians. Increased NATO military preparedness, especially in Poland, and tough economic sanctions could dissuade Putin from his expansionist policy, but that won’t save Ukraine. NATO and the United States should have sent military forces to western Ukraine. For fear of Russia, the Biden administration hesitated to transfer Polish planes to Ukraine. We let Ukraine down, and that will embolden Putin.

The free world must continue to support Ukraine with military and economic assistance, and sanctions must be maintained against Russia until it leaves Ukraine. Thereafter, Russia should be subjected to trillions of dollars in war reparations starting with its seized assets; and Putin and his cronies should be charged with war crimes.

Russia’s position among the countries has been damaged beyond repair, and Putin and Russia are considered outcasts of the world and enemies of humanity.