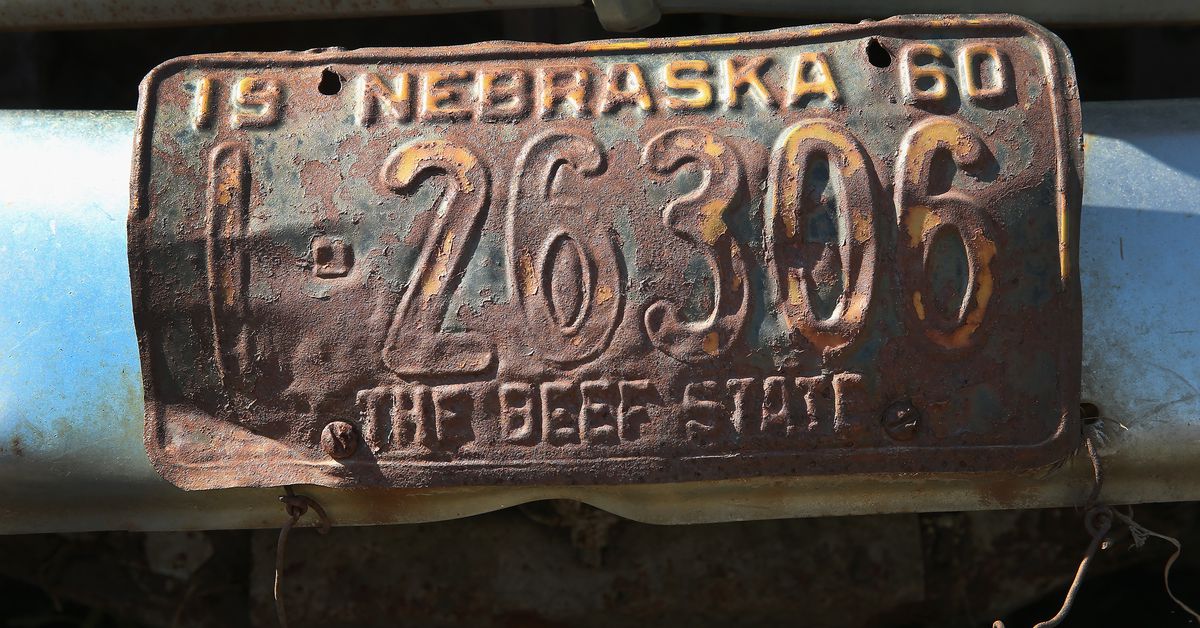 For those unfamiliar with this week’s news, Nebraska’s new license plate was unveiled to much fanfare and criticism. The news prompted a lengthy lecture by this writer in the website’s Slack channel on best practices and guidelines for vehicle tags, favorite and least favorite tags, and other unnecessary comments that led senior management to “suggest” that I write an article about the new tag and why I hate Iowa and its ugly, no good, completely lame black and white tag, among other things (more on that and why it’s at least better than the one in New York later). So without further ado, here is [not exactly] everything you ever wanted and lots of things you didn’t want to know about vehicle labels!

The new license plate (or “tag” as you may have already noticed, I often call it) is based on a Nebraska State Capitol mosaic named “Genius of Creative Energy”. The new label design will replace the 2017 redesign which was, as far as I can tell, a downright hated and mocked label that was based on the Golden Sower atop the Capitol building (after having to be redesigned after having was originally mistakenly modeled on a sower on Michigan State University’s Beaumont Tower). The new tag will go into production soon, and Nebraska Department of Motor Vehicle customers will begin receiving them in 2023 when vehicle registrations are renewed. Approximately 1.3 million registered vehicles will feature the new label design based on current registration.

Some might not be surprised, but most likely will find that license plates aren’t something you can just slap on the design front and send off to the production line. In fact, the American Association of Motor Vehicle Administrators (AAMVA) has a publicly available guide to industry best practices and guidelines.

These principles have been refined over decades of experience to ensure labels are easily identifiable and readable in all road environments, from a sunny day to a rainstorm in the middle of the night and through the forces of the order, electronic tag readers and other motorists to name a few. some. Requirements like fonts, reflectivity, where things can and can’t go on a label, and a number of other factors are all considered.

Nebraska First Lady Susanne Shore referenced this at the press conference earlier this week when unveiling the new design when she said, “I originally thought when we started that you just find a beautiful, eye-catching image and you place it stylistically on this plate and you’re good to go. Couldn’t have been more wrong,” state law has specific design requirements mandating certain font, letter and number sizes, colors, and visibility levels, all of which were likely defined by the state legislature in conjunction with Nebraska DMV staff based on AAMVA guidelines.

As an example of something that would arguably violate these guidelines, there was a briefly featured tag in 2011 that included “Nebraska.gov” at the top of the tag with “Nebraska” turned sideways to run up and down. down along the left. AAMVA guidelines state that only the issuing jurisdiction (i.e. state or province) should be written in full at the top of the label above the numbers. This ensures that viewers cannot confuse the Arkansas (AR) and Arizona (AZ) postal abbreviation codes, with just one of many possible instances of potential confusion. To be clear, AAMVA guidelines are not the same as Nebraska law, so I’m not sitting here writing that the original 2011 winner broke any laws, I just posted the guidelines of the AAMVA published in 2020.

For those unfamiliar with AAMVA, it is a “tax-exempt nonprofit organization” founded in 1933 that develops “model programs in motor vehicle administration, enforcement of the law and road safety. The association also serves as a clearinghouse for information in these areas and acts as an international voice for these interests.

On a final note, you may now notice that I draw attention to the fact that alphanumeric label printing in Nebraska is exactly that, a series of printed letters and numbers. The move is gaining momentum nationwide as a cost-saving measure over old-fashioned stamping that would lift the letters and numbers off the label to make them even more easily visible. If you talk to motor vehicle personnel across the country who have been in their jobs for a while, you’ll probably understand how the stamping should never have been removed. I’m not even close enough to the knowledge of amateurs in the industry to have an informed opinion on this, but it’s worth mentioning that it’s a point of contention for some regardless.

The first license plate ever issued by a state dates back to 1903 by the Commonwealth of Massachusetts. License plates have come a long way since those early versions and the upcoming arrival of a vehicle near you could bring even bigger changes. Right now, the California DMV, Michigan Secretary of State, and Arizona’s ADOT MVD already issue what’s called an optional digital tag to customers. Other state entities such as the Maryland Motor Vehicle Administration also completed a pilot program in 2021 of this technology, the fourth to do so.

A digital license plate uses technology similar to an Amazon Kindle to display a vehicle’s tag information on a digital ink display. It also allows the screen to display the tag number and relevant information even without the car’s engine running to provide it with active electrical flow.

This exciting new technology offers a number of game-changing changes to the industry, including the hassle of replacing your stickers when renewing. Instead, the screen can be instantly updated wirelessly when a customer renews their subscription. It also offers many more potential rescue options such as the ability to display real-time Amber alerts or an alert that the vehicle has been reported stolen. Some industry makers also claim that a parked car could potentially sell screen access for business messaging, but that seems like a stretch in many jurisdictions where the parking app would need access to the screen. label for ticketing information.

Another interesting development in California is a front license plate trim option for customers. Despite 31 states requiring a front license plate, including Nebraska, a number of automakers sell vehicles that do not have front bumpers capable of properly mounting a front tag to the vehicle without drilling. a large hole through the vehicle. Electric vehicle maker Tesla is a prime example despite being ahead of California’s demanding label, but traditional automakers like BMW and its 3-Series are also offenders.

The Golden State has begun offering a wrap-around sticker for the front bumpers of these vehicles that displays an image of a label that matches the one on the rear of the vehicle without the need to obtain a mounting bracket at the front. Compared to digital beacons, this isn’t exactly an “exciting” development, but if you’re an owner of such a vehicle, you’ll probably find it welcome news, you won’t have to drill an unwanted hole in your vehicle again. expensive.

As mentioned a long time ago in this article, I have a few states out there that I personally particularly hate standard etiquette. Iowa and New York are two. The Iowa beacon is basically a throwback design in its simple black background with white font and border. I think it ends up looking tacky. In that regard, I guess it fits well with the state being Iowans in general are sticky.

The Iowa label contrasts with the Vermont label which is a similar older design concept of solid green with white font. Unlike the Iowa which looks tacky and the printing rather than stamping also makes it cheap, the Vermont one is a long standing design that feels timeless and looks great.

By far, the ugliest label of the country of my life was the now abandoned Empire State of New York label. This one was ugly in every way, from the color to the bland design, nothing about this label was nice and it ended up having some peeling issues to boot in its final years of production which led to a change in supplier contract.

As for some of my favorite tags, some might accuse of bias in the selections, but happy to take the pressure as these are fantastic. Michigan’s “Mackinaw” bridge (the bridge really needs to be changed to the English spelling to balance things out) redesigned several years ago actually won the world’s best award. However, the label needed an overhaul as the white font color makes it difficult to read and was later changed to black. Again, AAMVA standards are really important (ignore the “Pure Michigan” at the top which arguably violates those standards). Either way, it’s a gorgeous design on a label.

One of my other favorite alternative label designs is Maryland’s Save the Bay label. This one is a uniquely colorful label that showcases some of the best Maryland has to offer. Maybe the next redesign of this one can give more prominent placement of the Chesapeake Bay Bridge spans to really kick the quality up a notch.

And all of you? What are some of your favorite and least favorite Nebraska tags? What about beacons from other states?