Freedom for Ukraine – The Royal Gazette 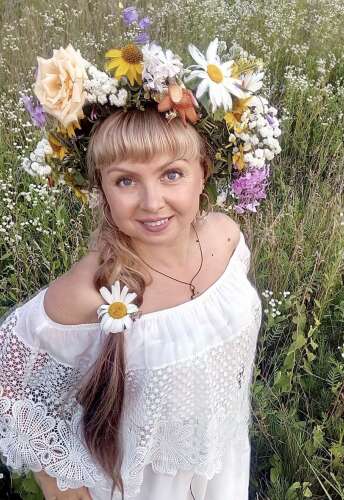 Nina London thinks we all need to do everything we can to secure victory in Ukraine. Pictured is her Ukrainian friend, Nina Artemova (photo provided)

A popular Buddhist belief in Thailand is to protect ancient trees, such as the banyan tree, by blessing them and wrapping saffron-yellow scarves around the trunks; then no one can bring them down.

We have a pair of sacred trees on our route, each more than two meters thick, with the lower trunks wrapped in silk; they have gone through centuries.

I wish I could have this magic power to wrap a blue and yellow national ribbon around Ukraine so that no one can invade, destroy and enslave these freedom-loving peoples.

February 22 at 4 a.m.: Vladimir Putin suddenly attacks Ukraine by bombing Kherson. He unleashes a murderous, ruthless and unprovoked war. He claims to want to bring Ukraine back into Russian subjugation, because Russia dominated Ukraine when it was a satellite state of the USSR.

The USSR existed exactly 69 years. It was a failed and bloody experiment in totalitarianism. This era shaped Putin’s worldview. He simply cannot accept that his once subjugated neighbor has built a prosperous and democratic country, free from the lies, censorship, control and fear that are now the new normal in Russia under Putin’s heavy hand. He wants more.

My great-grandparents were classified as dissidents and Lenin took them on a wagon from Ukraine to Eastern Siberia. They pushed them back empty-handed into a barren field thousands of miles from their home. I grew up in Siberia and I know the kind of world Putin is rebuilding.

It is impossible to describe my deep pain, shock and despair when I heard the news. Its roots are very deep. It is a war against our brother people. Historically and culturally, the three closest Slavic nations are Russia, Ukraine and Belarus. Our nations are linked by blood, we all have relatives and closest friends among them.

We studied in Kiev; sometimes married in Odessa. We still speak Russian among ourselves, cook borscht and canoe and laugh at the same jokes. For centuries we have been as tightly bound as the roots of trees. But not anymore; Putin ruthlessly cut them off like a barbarian, determined to build an empire.

Another reason why I am so incredulous is that as children in the Soviet Union we were brought up to be against war!

We have read countless history books on the horrors of World War II, watched many films about the war. We were taught that the Soviet Union had lost 22 million people in a single war! In every family, someone has been killed defending our homeland.

I feel that my fundamental values: freedom and peace, are flouted.

I often think about what I would say to my grandfather, Boris, who fought in World War II. How I was able to explain this war of aggression against our brothers and sisters by Putin; this selfish and naked grasp for power, domination and wealth? What would he say, a brave man who fought alongside millions of his countrymen to stop Hitler from seizing and plundering their Russian homeland?

The 43 million citizens of Ukraine under the leadership of President Volodymyr Zelensky do not bow to Putin. They bravely stand up to fight for their freedom and their future, and they fight desperately against all odds because they share a national dream: the freedom of an independent Ukraine.

No one has the right to take it from them.

My phone is flooded with messages from my friends in Ukraine. They flock to shelters, underground stations, basements… anywhere to be safe from the bombardments.

I cry when I read them; they are filled with hope.

Last night I was reading some to my husband, Bill. He had uploaded a song he had written and sung, FUkraine, and was stunned by the flood of heartfelt and grateful messages he received, many of which were written during attacks and bombings.

This is the one I received late last night from a bomb shelter during the ongoing battle of Mykolaiv, a city on the Black Sea:

“Thank you for your support, it means so much to us that I just shed tears! Airplanes are flying and bombing my hometown. Today many civilians were killed and my friends’ houses were heavily bombed We couldn’t sleep at night, windows were shaking, sirens were blaring My dad is here with me after he had a stroke and my mom had a nervous breakdown.

“My daughter asked me, ‘Are we going to be killed? Why, mom? I am very afraid. My husband has relatives in Russia and they don’t understand why we are fighting and don’t believe in the horrible things their soldiers are doing here on our land. It is a horror against humanity. Thanks very much. Please pray for me, my family and Ukraine. The only thing I want now is to survive.

The sunflower is the national flower of Ukraine and in popular imagery represents the warmth and power of the sun, revered by pre-Christian Slavs. Young girls were dancing among the sunflowers.

Today, during the Russian invasion, Ukrainian female soldiers carry guns and wear sunflowers in their hair.

Dear readers, my family, my friends, let’s do everything we can, let’s suffer all the difficulties, so that the bright sun of victory will soon rise and Ukrainians will grow new fields of sunflowers on their beloved land. Children will laugh and hide there, girls will weave beautiful crowns and bake bread, and men will build new houses.

Nina London is a Certified Wellness Coach, Qigong Teacher and Laughter Leader. Its mission is to support and help cancer patients and survivors and to inspire mature women to make positive changes in their bodies and minds. Share your inspiring stories with Nina at www.ninalondon.com and follow her on Instagram @coachninalondon