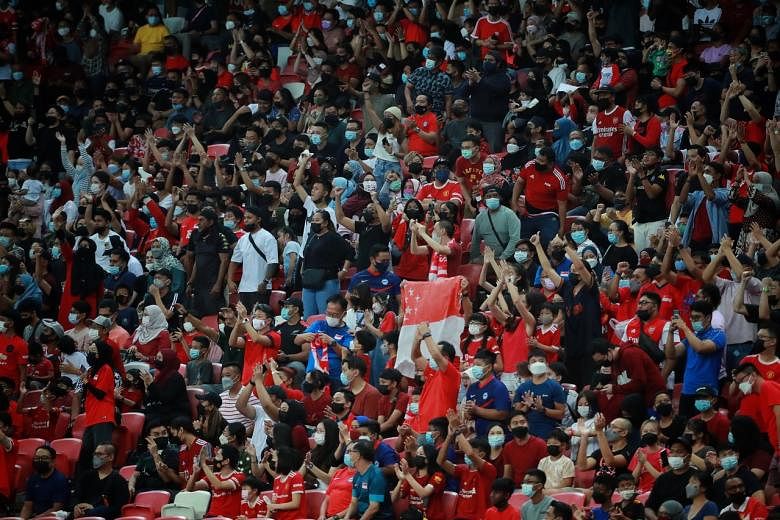 SINGAPORE — Drinks, keropok and curry puffs are yet to return to the stands, but the local sports fraternity has welcomed the relaxed guidelines announced by national agency Sport Singapore (SportSG) on Sunday March 27 allowing food and drink (F&B) consumption in stadiums.

The revised rules were part of SportSG’s advisory for Sport and Physical Exercise and Activity, which was released three days after Prime Minister Lee Hsien Loong announced a number of key changes to safety measures as Singapore heads into a new phase of life with Covid-19.

From Tuesday, the consumption of food and drink is permitted at sporting events in specially designated areas, although it is not permitted in the spectator stands. Even in designated areas, fans will be required to eat or drink at a fixed position and observe safe management measures (SMM) such as safe distancing and group size limits.

Cheering, chanting and whistling will also be permitted at events with spectators if masks are worn.

This is an important development for event organizers and fans.

During the ASEAN Football Federation Championship last December, for example, up to 10,000 fans were allowed each match day at the 55,000-capacity National Stadium and 1,000 at the 6-seater Bishan Stadium. 000 places. Each matchday consisted of up to two matches and spanned over five hours.

As the consumption of food and drink in the two stadiums was not permitted, supporters were given wrist tags which allowed them to re-enter after leaving the stadium between games for a meal.

Some fans took to social media to complain about the downsides and even wrote letters to the Straits Times Forum.

Engineer Syafiq Abdul Rahman, 33, and his five-year-old son were among 15,000 fans who attended Singapore’s 2-1 win over Malaysia at the National Stadium on Saturday. He told ST: “I planned to get into the stadium a bit later than usual, almost around kick-off (8 p.m.), so my child wouldn’t have to stay too long. a long time without hydrating.

“It’s great that the consumption of food and drink will soon be allowed again, so I can bring my family to games earlier so that we can all fully enjoy the stadium and the match atmosphere.”

The new rules also come at the right time for the HSBC Singapore Rugby Sevens, which will take place on April 9-10 at the National Stadium after a two-year hiatus due to the pandemic.

The tournament features short, fast-paced rugby sevens matches that start as early as 10 a.m. and end at 7 p.m., with little time between matches.