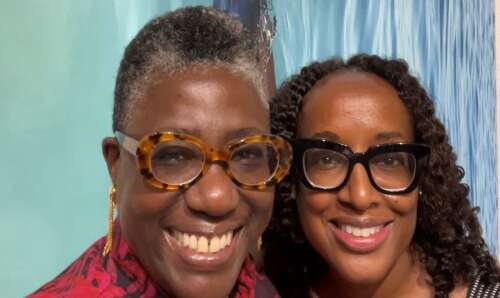 Past, present and future: the photographic collaboration of Judith and Julia Aidoo-Saltus Vocabulary #2: The Veneration of Mami Wata, part of the 2022 Bermuda Biennale (Photograph provided)

Judith Aidoo-Saltus’ photography at the 2022 Bermuda Biennale is a talking point for anyone interested in the African diaspora.

It’s also part of the love affair she shares with his wife, Julia Aidoo-Saltus, who is pictured in Vocabulary #2: The veneration of Mami Wata.

The photograph was taken shortly after one of the lockdowns caused by the pandemic in 2020.

Julia lay on her back in the waters off Whale Bay, kicking to stay afloat, as Judith urged her to ‘be still’ so she could capture the perfect image with her iPhone .

Hundreds of photos were taken. Julia suggested he put one in the National Gallery of Bermuda Bermuda Biennial 2022, A New Vocabulary: Past. Present. Coming.

“We take photos pretty much every day so I thought I’d submit something. I loved the theme too – A New Vocabulary: Past. Present. Coming.

“These are themes that I have thought about a lot,” said Judith, who was born in America but moved to Ghana with her parents when she was 12.

Past, present and future: Judith and Julia Aidoo-Saltus in front of Vocable #2: The Veneration of Mami Wata (Photograph provided)

“We have a concept in Ghana, sankofa, this principle of going back to the past to find what is good in order to move forward. And so this notion, of past, present, future, resonated with me because of this principle.

The Harvard-educated lawyer and investment banker has “always loved the arts and culture.”

At Rutgers University, where she studied business and French, she took the first of many photography classes.

She then turned to cinema before joining the production team of Bridge and Tunnela Tony Award-winning piece.

“I [also] own radio stations, so this issue of using media and art to uplift people is something close to my heart,” she said.

Connections: Judith Aidoo-Saltus received a postcard featuring Sharon Wilson’s art many years ago and was surprised to come across the original during a visit to the island in 2016 (Photograph provided)

Eventually, she decided to take a break from producing films and plays and focus on photography, “my first love, which is just walking, wandering, looking and seeing; train the eye to see even as a meditation”.

The Veneration of Mami Wata honors a respected water spirit in the African Diaspora.

“[She is a] mermaid spirit, this mermaid who attracts people with her beauty and her wisdom,” said Judith. “And so when I saw this image, that’s the first thing I thought of – it’s Mami Wata coming to life.”

She is grateful for the advice of Peter Lapsley, the executive director of the National Gallery of Bermuda, that she enlarged the photograph; Loris Topan of ColourLab Bermuda Ltd did “just a brilliant job” after overseas attempts degraded the color of the ocean.

His wife was just as thrilled as she was with the outcome, Judith said.

“We see it as a joint project. I took the picture but she was absolutely with me creating that moment… that look on her face, there’s a light that hits her face in a way, it’s almost angelic.

“There is a look in his eyes that is very specific. I took thousands of photos of her and none of them appeared like this. Sometimes you are lucky.

Judith’s late Ghanaian father was studying classical music at Oberlin College and Conservatory when he met her mother, a student at Howard University. His father then moved to Howard where he trained as a surgeon in the late 1950s.

“My mother is from Charleston, South Carolina. In Charleston, there is a place called Charles Towne Landing.

“There’s a story about how some enslaved people went back into the water rather than being enslaved and this idea that they flew away like birds.

“It’s one of those stories, those living myths. They still talk about it, how water has spirit and if you enter certain bodies of water you will feel the energy of that water.

“Sometimes it’s peaceful, sometimes it’s troubled, but you’ll feel the spirit in the water. It keeps coming back.

Like her parents’ water spirit connection, she has benefited from many “chance events”, she added.

On pilgrimage: On a trip to Ghana, Judith Aidoo-Saltus, left, visited the Mami Wata shrines. She is pictured with one of the priestesses who worship Mami Wata and other spirits (Photograph provided)

At Harvard Law School, a friend who was finishing his JD-MBA asked him to present his resume to the Goldman Sachs representatives who were there to conduct interviews.

“That was before the emails and all that and I said ‘sure’ – I didn’t even know what an investment bank was. But when I handed over the CV, I started talking to the recruiter and we kind of fell into this wonderful conversation.

Before she knew it, she had agreed to apply for a job herself.

“One thing leads to another; it was by no means planned. It was really a fluke, just helping out a friend, and I happened to have this conversation that then changed the course of my life.

While looking for a romantic connection online, she spotted a person with the handle “Juju”.

“Good juju… is the West African expression we use to indicate ‘magic’ or, more specifically, the presence of ancestral spirits to guide us.

“If it weren’t for Julia’s use of the word Juju – a nickname from her college years in England surrounded by so many West Africans – I wouldn’t have noticed her profile at all.

“She only had one photo and about five to seven lines of prose. On the other hand, of course, I have maximized the photos and the essay section.

The couple “started an old-fashioned correspondence,” getting to know each other only through emails for 30 days.

Judith, then living in New York, offered to have lunch in Bermuda; Julia insisted that she come for a few days so she could show her the island.

“Because I love art, I asked her to show me some of the artists on the island and the last artist we went to visit was Sharon Wilson.

“The last painting from the last room I saw in his gallery was the original of a card someone gave me 30 years earlier,” she said. “I believe in serendipity. I had to have this painting. I wouldn’t even negotiate the price, because for me it was so crazy – a random visit to Bermuda from all places.”

She left with the coin, promising to transfer the funds.

Back in New York, as she was about to pay, she discovered that Julia had bought it for her.

“She said, ‘I saw the look on your face, and I wanted to be the one to give it to you.’ Just the fact that she thought about doing it was very powerful to me. What a wonderful, generous thing. .

Despite this, there was a lot of talking before she “reluctantly” accepted the gift.

“I don’t accept expensive gifts from people because I find that sometimes it complicates my life a bit,” Judith said.

“But she said, ‘Can you imagine a scenario where I giving you this painting would be OK?’ And since I consider myself a creative, it was time for the loop. She got me. It was like, checkmate.

“So literally I arrived on a Monday, left on a Wednesday and came back on a Saturday, three days later, and I never left, basically. We’ve been together ever since.”

The couple’s 2017 wedding was the first same-sex wedding on the island.

“What I like about Bermuda is that it’s beautiful, it’s clean, the people are nice, at least half the population looks like me. And so for me it’s in some ways a perfect place,” Judith said.

“I can run around the world and come back to Bermuda because I feel safe, calm and beautiful. It’s a wonderful place to restore, that’s how I feel.

The response she received from Vocabulary #2: The veneration of Mami Wata has been fantastic. His hope is that it gives confidence to other artists to submit their work.

“Many of us take pictures, make art or write poems and we never submit. I want to encourage everyone who reads this article, everyone who has ever done anything, even artistically, to submit it.

“Just put it over there. I think there is power in publishing it and sharing it with the world.

The 2022 Bermuda Biennale takes place at the Bermuda National Gallery until December 30. For more information: www.bng.bm