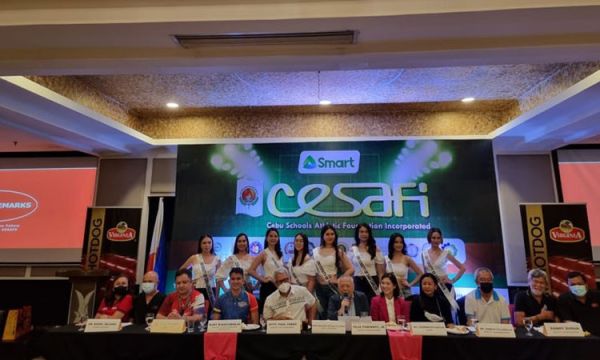 Cesafi officials led by Commissioner Felix Tiukinhoy are joined by contestants from the Miss Cesafi pageant at the league launch on Wednesday at the Cebu Parklane International Hotel.

After almost three years of waiting due to the Covid-19 pandemic, Cebu’s most prestigious interscholastic league – the Cebu Schools Athletic Foundation Inc. (CESAFI) – makes its long-awaited return on April 22, Friday, at the Coliseum from Cebu.

The new season kicked off on Wednesday afternoon at the Cebu Parklane International Hotel. Attending the event were the league’s longtime commissioner, Felix Tiukinhoy Jr., as well as athletic directors from participating schools. Also present were the

There will be 13 basketball-led events this season, kicking off at Cebu Coliseum. However, according to Tiukinhoy, there will only be a three-point shootout rather than the regular games as the different schools still need to prepare properly.

“These are just mini-events. We have changed the events we have. We would like to show that we are here and we are here to lead Cesafi for the next few years to come,” Tiukinhoy said.

Friday’s opening ceremonies will be marked by the Miss Cesafi pageant.

“We also asked schools to bring athletes and students for the parade,” Tiukinhoy added.

Tiukinhoy also said they are looking forward to hosting the next season in September. He added that he hoped to have regular games by then.

“By then, most schools may already have face-to-face lessons,” said Tiukinhoy, who said they would remain vigilant despite the looser regulations.

“When we have this season, we still have to comply with all the regulations we have.” (NPC)